The Whites won their third game in five days against Baxi Manresa and remain undefeated leaders in the league. Campazzo and Llull put in great performances.
WiZink Center

78
Real Madrid rounded off a perfect week with their third win in five days after beating Maccabi and Fenerbahçe in the double round of the Euroleague. The Whites got the win over Baxi Manresa, who came in to the game as one of the best teams on the road, in a match in which they were always ahead with Campazzo at his best (20 points, 5 recoveries and 28 PIR) and a strong Llull (17 and 21). Tavares registered a double-double (11 points and 10 rebounds) and Carroll is now the second highest three point scorer in the history of the ACB (662). Causeur came back, recovered from the COVID-19 positive, as the league leader went 11-0 up, making it 11 wins in both competitions.

Llull and Tavares set the tone and Real Madrid soon imposed a frenetic rhythm. The two of them bossed the offensive game in the first 6 minutes, with 11 (16 PIR) and 8 points (+ 2 blocks) respectively, to take the lead in a first quarter in which Manresa could only get on top of a solid white defense in the final stretch thanks to the contribution of Sima (25-18, min. 10).

The Real Madrid initiative
The match had gone in to top speed in attack, with both teams showing their strengths. For Real Madrid, with Laso's rotations to keep things fresh from the start. Carroll, with 10 points, was the White's fulcrum in a widely spread scoring, with Garuba, Abalde, Campazzo and Reyes also involved, who became the fourth highest scorer in the history of the ACB, tied with Juan Carlos Navarro (8,320). Minutes earlier, two triples from the American shooting guard equaled Herreros as the Madrid player with the second most treys in the ACB. The leaders also defended a relatively comfortable lead until half-time (reaching a +12) against a Manresa team that held its own with Eatherton and Rafa Martínez (47-40, min. 20).

Real Madrid overcame the issue of the losses and took a +18 advantage at the start of the third quarter after a 13-0 run based on a great defense, with Tavares impenetrable and getting his fourth block of the afternoon (60-42, min 25). But Manresa, far from falling apart, responded with another run of 0-11 led by Sajus and Mason, closing the gap to 7 points a couple of minutes later (60-53, min. 27). This situation didn't improve because, in spite of the reaction by the visitors, Real Madrid was very solid. Campazzo, with 7 points, and Llull, cancelled out Manresa's attempt in a third quarter that ended 73-58 and in which there was another big story with the return of Causeur.

The leader didn't relent
Laso's side produced in the final stretch of the first part of the last quarter. When they had to get their act together in defence, they did so by nullifying Manresa, who lost a lot of their offensive performance. Real Madrid continued with their attacking fluidity and little by little the difference increased until they surpassed 20 points. Deck and again Campazzo's moment. The point guard condemned the match with another great performance and, with 4 minutes left, was replaced with 20 points, 4 rebounds, 5 assists and 28 PIR. The Whites reached 100 points in another exhibition (100-78, min. 40). Great week for the Whites and better November, with 8 victories in as many games. There is only one left to finish the month, this Thursday against CSKA Moscow (6pm). 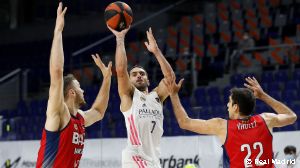 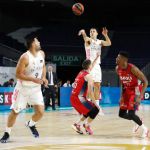