Mariano put the Whites ahead just two minutes into the game but the hosts levelled from the penalty spot in the second half.
Estadio de la Cerámica

1
Real Madrid returned to LaLiga action following the international break, picking up a point on their trip to Villarreal on match day 10. Neither a glut of injuries nor the opposition's pedigree were enough to stop Zidane's men going all out to win the game from the moment they set foot on the Estadio de la Cerámica pitch. Indeed, the very first attack of the game quickly saw Madrid take the lead.

Kroos switched the ball beautifully out to Carvajal, who brought it down nicely and crossed to Mariano, who was on hand to turn it into the net with a fantastic header. The move was reviewed by VAR for a possible offside against Lucas Vázquez, but he was adjudged not to have interfered with play and the goal stood. A goal to the good, Madrid looked solid, keeping the ball well to withstand the opposition pressure and being strong at the back when Villarreal did look to create danger.

Another opportunity
The home side weren't creating many chances and Courtois wasn't troubled in the Real Madrid goal until the 20th minute when Parejo's header sailed over the crossbar. Zidane's side were growing into the match and on the half-hour mark, Kroos played Carvajal in behind, catching the defence out, but the full-back's shot went wide. Shortly after, Mariano was involved in a great counter-attacking move and the ball ended up hitting the post, although play was brought back as the forward was offside.

Penalty
After the break, Villarreal came out with increased intensity and had two good chances to draw level but neither Gerard nor Parejo were able to convert with 56 and 69 minutes on the clock. With 15 minutes to go, the referee pointed to the spot after Courtois brought down Chukwueze and Gerard made it 1-1. Zidane brought on Isco, Vini Jr. and Asensio as the team continued to stream forward in search of a goal, while keeping it tight at the back to pick up an important point. 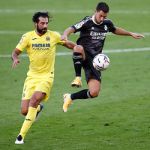