3
Real Madrid Women registered a fifth Primera Iberdrola win after easing to a 3-0 away triumph over Betis in the sides' Matchday 9 meeting. The madridistas produced a commanding performance at the Municipal Felipe del Valle and found themselves three goals to the good at the break, courtesy of strikes from Kaci, Marta Cardona and Kosovare Asllani (the division's top scorer with eight goals to her name).

The contest got off to an even start, but after the halfway point of the first period, David Aznar's ladies began to assert their authority. Kaci's powerful effort from outside the box put the visitors in front with 32 minutes on the clock. Just seven minutes later, Marta Cardona outfoxed Méline in a one-on-one to make it 2-0, before Asllani struck in first-half injury time to add to Madrid's advantage.

Defensive solidity
Betis didn't cave in and sought to reduce the arrears after the restart. Sosa tried her luck in the 60th minute, but Misa comfortably gathered her effort in. Despite the hosts' constant probing, the madridista backline stood firm and prevented any serious efforts on goal. In the 90th minute, a Betis attack saw both Axia and Mari Paz have chances in the box, but the assured Misa dealt with the threat well. Real Madrid saw the game out to record an impressive win. The Whites are next in league action at home to Sevilla. 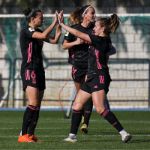