Laso's side are looking to extend their winning run from this double header after defeating Maccabi on Wednesday (9:00 pm CET).
Real Madrid has had little time to enjoy the great victory against Maccabi 48 hours ago and now faces the second EuroLeague game this week at the WiZink Center (before another match at home on Sunday against Baxi Manresa). This time the Whites go head-to-head with another of the greats of European basketball in Fenerbahçe, in what has become a classic match-up in this competition with this the 28th edition. Laso's charges will be vying to continue their winning streak and claim their fifth consecutive win, the tenth in all competitions.

The two teams have met 27 times in the EuroLeague since the 2002-03 season in the regular league, playoffs, semi-finals and final, with a 18-9 record in favour of the madridistas. Four of these wins have come in the last four games. Real Madrid goes into the encounter one victory ahead of Fenerbahçe in the standings (5-4) after a streak of four victories in a row (Bayern Munich, Zalgiris, Crvena zvezda and Maccabi), which has led to a sensational rise from 15th to 6th in recent weeks. Fenerbahçe goes into the match at the WiZink Center after two consecutive defeats (Barça and Baskonia), although the team has won on courts at Maccabi and Anadolu Efes.

Real Madrid boasts a better attack, with a scoring average of 80.1 points compared to Fenerbahçe's 72.7. In defence, the numbers are a little more favourable to the Turkish team (76.4 compared to 79.2), but Laso's players are starting to improve in this area. They conceded 63 points against Maccabi and in the last two games they have an average of 65 points against. Fenerbahçe has strengthened in its ranks. There is no Obradovic or Sloukas, but Lorenzo Brown, Ulanovas, Barthel and Eddie, to name a few, have arrived, in addition to coach Kokoskov. De Colo has been ruled our through injury, but Vesely will be available.

Maximum points so far in November
It's six victories in six games for Real Madrid: Valencia Basket, Bilbao Basket, Zalgiris, Urbas Fuenlabrada, Crvena zvezda and Maccabi. These were preceded by the last three in October against Movistar Estudiantes, Coosur Betis and Bayern Munich. The team has gone almost a month undefeated, since 23 October, and it's fair to say that Laso's charges have turned the corner. Tonight, it will be another great test to see how good the Whites really are, as they go in search of another victory in the EuroLeague. 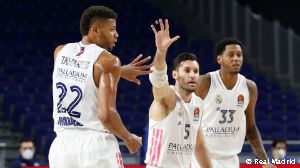