0
Real Madrid defeated Athletic to seal their third consecutive home win. A goal by Cardona in the first half handed the three points to David Aznar's team - a much deserved victory after dominating the match. The hosts broke the deadlock on the quarter-hour mark when they put away their first chance of the encounter to make it 1-0. A deep pass was played down the left flank for Jakobsson, who set up Cardona to score from inside the area (15’).

The hosts continued to dictate the pace of the game, while the Basques went in search of an equaliser from set-plays. In the second half, Athletic put more pressure on the hosts but the madridistas refused to just sit back and defend. Asllani came close to scoring a second with two chances on 56’ and 58’, but she failed to hit the target. The visitors had a low effort from Eunate on 66’ that also sailed wide.

As the minutes passed, both teams kept trying to create chances, but their attempts were unsuccessful. A shot from Cardona was well held by the visiting goalkeeper (72’) and a header from Jakobsson on 97’ was off target. The game was end to end stuff. The visitors piled on the pressure in the closing stages but the madridistas' defence remained solid, as the hosts held on to claim all three points. The Whites travel to Betis next weekend. 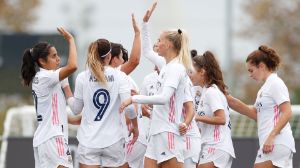 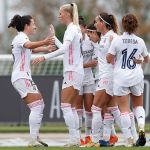