The academy side, who had chances to win the game, conceded in the 88th minute.
Cerro del Espino

0
It was a frustrating day for Real Madrid Castilla, who slipped to defeat away at Rayo Majadahonda (1-0), in the postponed game corresponding to matchday 3 in the league. The academy side had clear chances to claim the three points, especially in the second half. The Whites, who thought they should have had two penalties, were defeated after a volleyed strike from Carlitos in the 88th minute.

The first half was a goalless, tactical battle with few openings for either side. The madridistas went close on 10’ after a shot from Hugo Vallejo was cleared away by the defence. Three minutes later, Pablo Ramón was forced off through injury and was replaced by Kenneth. As the minutes passed neither side managed to create any clear chances, until Dotor had the best opportunity of the match when his shot from the edge of the area was off target (27’).

Castilla went for the victory
After the re-start, Hugo Vallejo came close to putting Real Madrid ahead with a header. Rayo Majadahonda reacted with two efforts on goal. First a chip by Rubén and then a header from Sergio that missed the goal. Raúl brought on Arribas and Blanco and the visitors caused more of a threat. On 67’, Hugo Duro claimed a penalty for a tug inside the area. Five minutes later, Castilla had one of the clearest chances. Sotres saved a fierce shot from Guillem and then denied Miguel. On 79’, Hugo Duro wanted another penalty after being brought down by Bernal but the referee awarded a free-kick on the edge of the box. Then, against the run of play, Carlitos scored the winning goal for the hosts (88’). It's a hard defeat to take for Castilla, who deserved much more against Majadahonda. 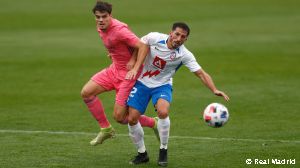 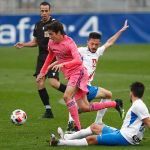