Three penalties and an own goal give Valencia the win.
Mestalla

1
Real Madrid lost at Mestalla ahead of the international break. The Whites took the lead thanks to a Benzema goal, but three penalties and an own goal saw Valencia pick up the three points. Zidane's side had the best chances in the first half with Asensio coming close from the edge of the area after ten minutes. Shorty after, Benzema linked up with Modrić and the midfielder's shot drew a big save from Domenech. With 16 minutes on the clock the roles changed. The Croatian took the corner and the Frenchman's header was saved by keeper.

Benzema came close
Real Madrid's goal came after 23 minutes. Marcelo played in Benzema, who made it 1-0 to the visitors with a right-footed strike from outside the area. But the joy was short lived, as six minutes later Gayà crossed and the ball struck Lucas Vazquez's hand. Soler took the penalty and Courtois saved the first effort, but the Valencia player's shot hit the post before Musah turned it home. VAR instructed the referee to check the monitor and ordered a retake as Musah and Lucas Vázquez had gone into the area too soon. Soler re-took the spot kick and made it 1-1.


Valencia took the lead before the interval in a move that began with a foul from Denis Cheryshev on Marco Asensio. As play went on, Maxi Gómez crossed the ball over and in his attempts to clear his lines, Raphaël Varane contrived to put the ball into his own net. After the restart, Lee Kang-in fired in an effort from the edge of the box that Thibaut Courtois got just enough on to tip the ball onto the post. Six minutes later, the referee awarded a second penalty for the hosts following an incident involving Marcelo and Maxi Gómez and Carlos Soler stepped up to make it 3-1.

Third penalty
The visitors now looked to haul themselves back into the game, with Fede Valverde lashing in a powerful effort from the edge of the area in the 57th minute that Jaume Doménech kept out with a marvellous save, which fell to Vinicius Jr., whose effort sailed over the bar. Two minutes later, Luka Modrić played a sublime pass with the outside of his boot to pick out Asensio, who failed to get the better of the Valencia goalkeeper. With 59 minutes played, the third penalty of the night was awarded for a Sergio Ramos handball, with the referee pointing to the spot without consulting the VAR monitor. Soler once again made no mistake to make it 4-1 and round off the scoring. 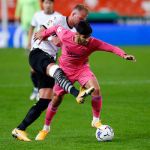