The captain now has 100 goals to his name in Madrid colours, whilst in 2020 he has beaten his record for goals scored in a calendar year.
Sergio Ramos headed home his 100th Real Madrid goal in the meeting with Inter Milan. The captain's goals have come in LaLiga (72), the Champions League (14), the Copa del Rey (seven), the Club World Cup (three), the UEFA Super Cup and the Spanish Super Cup (two apiece). Many of these strikes have been crucial to the team's trophy successes, such as the goals he netted in the final that saw the club clinch the Décima, which he named as the favourite of his century, and the Undécima showpiece.

Meanwhile, Ramos's goal in the side's last outing was his 11th of 2020 and saw him surpass his previous goals tally in a calendar year. The defender improved on his previous-best return of 10 goals, which he chalked up in 2014, 2018 and 2019. In 2020, he was on target against Osasuna, Celta, Éibar, Real Sociedad, Mallorca, Getafe, Athletic and Leganés en route to clinching the club's 34th LaLiga crown, whilst this term he has found the net in the games against Betis, Barcelona and Inter Milan. 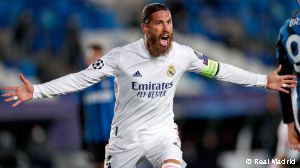