Felipe Reyes moved level with Juan Carlos Navarro as the fourth highest scorer in the competition.
Sergio Llull and Felipe Reyes continue to break records and make history as Real Madrid players. The Menorcan became the second highest scorer for Real Madrid in the ACB, with 5,323. He needed three points to move ahead of Biriukov (5,311) and he scored 14 in the Whites' victory over Bilbao Basket in the postponed game on matchday 6. Ahead of him is only his teammate Felipe Reyes (6.003).
In his 15 seasons as a Real Madrid player, Llull has played 480 league matches with an average of 10.9 points per game, and has consistently been one of his team's main sources in attack. His highest scoring season to date was 2016/17 (16.4 points on average), when he was also chosen as MVP of the competition. The madridista occupies the seventh place of the all-time scorers in the ACB.

Felipe Reyes, fourth highest scorer in the competition
Meanwhile, the club captain scored two points against Bilbao Basket and has a total of 8,318 in ACB, moving level with Juan Carlos Navarro as fourth highest scorer in the history of the competition. Reyes averages 10.2 points in his 818 games played. The standings of all-time scorers are topped by the technical director of the Real Madrid basketball team, Alberto Herreros, who notched up 9,759 points. Behind him are Jordi Villacampa, with 8,991, and Brian Jackson, with 8,651. 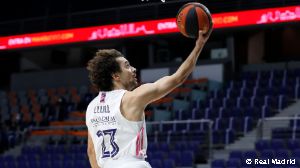 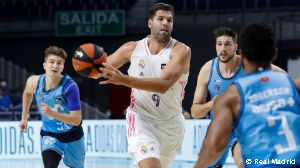