Benzema and Ramos put Real Madrid into the lead, only for the Italians to level , before Rodrygo rounded off the scoring in a topsy-turvy contest.
Alfredo Di Stéfano

2
Real Madrid picked up three priceless points against Inter Milan at the Alfredo Di Stéfano. Karim Benzema and Sergio Ramos, who brought up his century of goals in Madrid colours, put the hosts into the ascendancy in a sublime eight-minute spell, but Lautaro Martínez netted before the break and Perišić struck in the second half to restore parity. Following a fine team move, Rodrygo, secured the spoils for Madrid, who now have four points to their name in a very even Group B.

The first half proved to be a high-tempo affair that produced chances at both ends. The first clear-cut opening came in the fourth minute and went Madrid's way. Eden Hazard laid the ball off to Marco Asensio, whose effort from inside the box forced Samir Handanovic into a fine save. Inter's response, which came in the form of two quickfire efforts, came six minutes later. Firstly, Ivan Perišić crossed the ball in and Nicolò Barella's thumping header struck the woodwork. In the very next move, Lautaro Martínez's effort inside the box was gathered in by Thibaut Courtois

Benzema strikes for third game in row
The chances continued to flow with Arturo Vidal's long-range shot in the 14th minute crashing into the side-netting and the riposte from the home side came nine minutes later with an even better opportunity to have broken the deadlock. Benzema's cushioned header inside the box fell to Fede Valverde, who contrived to send his volleyed effort over the ball. However, the whole complexion of the game changed in the next move. Benzema capitalised on a backpass from Achraf, before taking the ball around Handanovic and slotting home into an empty net. The Frenchman has now scored four times in his last three outings.

This was Real Madrid's best period and the team made it count in the 33rd minute. Kroos sent in a corner that was met superbly by Sergio Ramos, whose downward header beat Handanovic. This was the Spaniard's 100th goal as a madridista - an incredible achievement for a defender. However, the celebrations were cut short when Lautaro Martínez reduced the deficit, after a sensational back-heeled assist from Barella.

Inter draw level
After the break, the game slowed down and few clear chances were created. Zinedine Zidane made two substitutions on 63’ - Vinicius Jr. and Rodrygo were brought on for Hazard and Asensio and three minutes later Madrid almost made it three. Lucas Vázquez received the ball on the edge of the area and toe-poked an effort inches wide. Perišić then equalised for Inter on 68' from his side's first chance of the second half.

Rodrygo seals victory
It was all to play for with 20' left on the clock. Lautaro Martínez went close with a shot from the edge of the box on 75’, but the decisive goal came at the other end from a fine piece of counter-attacking play. In the 80th minute, Valverde's clever pass out of defence picked out Vinicius Jr. who burst down the left wing and put in a low left-footed cross. Rodrygo controlled the pass and fired the ball into the top corner. The hosts almost scored a fourth in stoppage time when an effort from Benzema inside the area was well saved by Handanovic for a corner. Real Madrid claimed a hard-fought and vital Champions League victory. 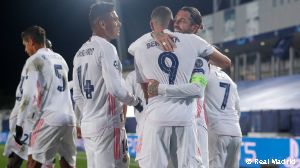 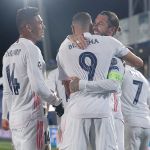