The Whites had seven players in double digits for PIR as they easily got the better of a team who came into the clash as Euroleague leaders.
WiZink Center

82
Real Madrid made a real statement of intent with a convincing win over Bayern Munich, who landed at the WiZink Center as Euroleague leaders. The Whites produced a supreme second half to resolve a tough clash against the German side, who stayed with the hosts for three quarters. Seven players hit double PIR figures in a seamless team display with Carroll (19 points and a PIR of 20) and Randolph (13 and 20) top scoring. Other strong performers were Thompkins (16), Abalde (10) and Llull who posted 14 points to move into sixth place on the competition's all-time point-scoring list with 3,028.

Real Madrid flew out the blocks to dominate the first quarter in striking fashion (27-17). The defensive intensity and precision in offense took the Euroleague leaders by surprise. So much so, that their irate coach, Trinchieri, was sent to the stands with 2:30 played. A 13-4 run with 7 for Randolph gave the Whites the initiative, moving around ten points clear. Carroll added another 10 himself to continue his team's offensive bombardment against opposition who were trailing from the get-go.

Madrid dig in against the visitors' resurgence
The Germans improved in the second half thanks to a better offensive rebound and the inspiration provided by Baldwin IV and Zipser. Real Madrid's shooting percentages dropped off significantly and they gradually began to hand the initiative back over to Bayern Munich, who cut the lead until they edged ahead by a single point with 16 minutes gone (35-36). It was a new game now, and Laso's men reacted at a crucial moment. An exchange of baskets set the stage for a sublime final minute by the madridistas. At 44-45, Campazzo stole the ball and forced a technical foul. Two free-throws and the final possession. That's when Llull stepped up to sink a gorgeous three-pointer to send his team into the break four up at 49-45.

Real Madrid managed to remain calm as Bayern Munich continued to cause problems. They tightened up on the rebound, yielding immediate results as the visitors saw their numbers fall off. The third quarter was a lower-scoring affair but the hosts bided their time and moved the ball well to find the right shots. It was a positive spell for Laprovittola, who controlled the game after Campazzo took a knock to the knee and had to come off. The points were coming from Carroll, Randolph and Thompkins, today's star performers, who helped the Whites get back to +10 at 70-60 with 29 minutes on the clock.

Madrid in tune
Real Madrid came out in the final quarter determined to quash the resistance being shown by a hugely competitive rival. Baldwin IV was kept quiet (more top defense by Abalde), and some fresh legs were brought on to end any lingering German hopes. Abalde, Garuba, Rudy… punished a defense who were overrun by the hosts' effortless teamwork to post a 14-6 run in five minutes which all but ended the game at 84-67. But the Whites were hungry for the century. Llull hit two triples and two free-throws to race to 14 points and bring up three figures on the scoreboard, as well as overtaking his teammate Felipe Reyes as the sixth-highest scorer in Euroleague history (100-82, min. 40). 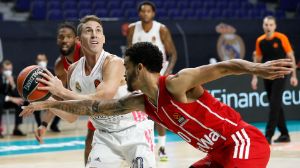 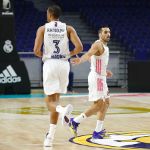