"You're one of great figures within Real Madrid's basketball team and you've become a legend at our club", stated president Florentino Pérez at the gala event hosted by the El Español newspaper.
Pablo Laso received the 2020 Premio León for the Best Sportsperson at a gala event organised by the El Español which celebrates its fifth anniversary. The coach, who took charge of his 700th match at the Real Madrid helm against Estudiantes, collected the award at an event where he was joined by club president Florentino Pérez and captain Felipe Reyes.

In his address, Florentino Pérez spoke about the coach's merits: "Not only has Pablo Laso brought trophies, he's also offered a way of securing them. A playing model that's faithful to what Real Madrid basketball has stood for throughout its history. Being the coach of the Real Madrid basketball team is a really tough task. But to have been coach for nine years and to have won 20 pieces of silverware puts him up there as one of the all-time greats".

"Pablo Laso has become a legendary figure in the history of Real Madrid, and on the same level as our legendary basketball coaches, Pedro Ferrándiz and Lolo Sainz. Indeed, yesterday Pablo Laso made it 700 games as Real Madrid coach".

Club man
"Alongside these statistics and the trophy haul that makes him into one of our club legends, I want to stress that Pablo Laso is a club man who knows the club inside out, from his playing days, as well as the values that Real Madrid was built on. He has made those values his own and instils them in all those around him every single day".

"Today we're unfortunately missing our club members and fans at our arena, but we're certain that we'll soon be back together to enjoy watching a team that
never gives up and that always strives for more".

Success
"This team is a family and Laso has played a big part in that. In each trophy success and each win, you can feel the camaraderie and respect that brings the players together. Dear Pablo, thank you for representing Real Madrid in the way you do and for having been one of the main driving forces behind each of the 20 trophies won in these nine years. You've managed to become one of the major figures of Real Madrid's basketball team. As president, it makes me proud to be here with you at this event".

"I think this award recognises a career and that makes me feel even prouder. The fact that people have rediscovered their love for basketball through Real Madrid is worth more than any silverware. We sportspersons aren't alien to what's going on and we've always tried to help as much as possible. The most important thing is that people consider us to be a reflection of society". 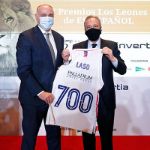