"I feel very proud to reach such a big milestone like this", the coach told Realmadrid TV and Realmadrid.com.
Pablo Laso coached his 700th match with Real Madrid against Estudiantes. A milestone that he reached in his tenth season at the club, where he has won 20 titles, including a spectacular haul between 2014 and 2015. Laso has the second highest number of matches in Real Madrid's history, behind Lolo Sainz (734). The coach reviewed the most significant moments of his career on the Whites bench in an interview with Realmadrid TV and Realmadrid.com.

Arrival at Real Madrid
"It was a very exciting day and very important in my career to be able to get to coach a team like Real Madrid, where I had already played. I had the impression that I had a complicated and difficult job, but an exciting one. At Real Madrid, the short term means the next match, being competitive and transferring the values that we must transmit as a team and as a club. I knew that I was going to be at a great club and with great players. I took it for granted that the demands would be very high, but at the same time I had the personal motivation to transmit all those values to the fans, the club and the players".

The Ninth and Tenth
"The Ninth was a very special moment because there were a number of circumstances. The fact that we were so close, that we had played finals... Besides, playing the Final Four in Madrid was a source of pressure, but everybody was able to do a great job. In the end, it was two finals in one weekend and they backed up the work of the whole season. It's the winning of a title that was very special for everyone, especially due to playing at home".

"The season of the Tenth in Belgrade was very turbulent. From Llull's injury to Campazzo's comeback to Doncic's arrival. But in the end we took Thompkins' offensive rebound or Causeur's games. That was a very special feeling for me because it speaks of the work of a group of players. Without the contribution of the whole team it would have been very difficult to have won that Euroleague. The general feeling that season was that the team was competitive in spite of the problems. Therefore, I'm very happy for that title".

The support of the club
"Everything has a driving force and if I had to define the president I would say that he is the driving force of the club. I always tell this story. In my first season, when we won the Copa del Rey in Barcelona, the president congratulated me and gave me a hug. But the first thing he said to me was: 'Look what you've done. This is very good, but now you need to win the league'. That is what Real Madrid means. We are all very happy with the ambition that we have achieved something successful, but tomorrow there is another challenge. Florentino transmits it to all the levels of the club and that makes us be recognized all over the world".

"I only have good words for the president. When he comes to us he asks us if we are OK, why this has happened and why not the other. After a game we were playing in Istanbul he called me on the phone to ask me what we did wrong... That demand is there and speaks very well of the president. Besides, he's the first one who makes you feel better when you have a bad day".

The historical five titles
"This milestone, the achievement of the five titles, speaks volumes about how the team has been able to maintain its work over time. We were able to win the Super Cup at the start of the season, we won the Cup, the Euroleague, the League and the Intercontinental. It wasn't easy. I always think about it. But I also appreciate how difficult it is. Every title has its own story and its own moment in time. Every competition has a different format and my obligation as a coach is to continue growing in order to be competitive. Hopefully in the future we can achieve more milestones like this".

With the five titles, his character went to another dimension. This is how Laso sees it: "I don't think about it much. What I try to do is not change too much. To give an example: What if we had lost everything that day, and since we won, everything is fine? It's not my way of thinking, but it's true that these are special days because they make you value your work so much. There's no doubt that it was a very important title for the team, the club and the city".

The youth system
"The work of Alberto Angulo, his coaches and assistants often doesn't get the attention that the first team gets. To be a strong club we need it to be, for example, when a child at 13 joins. We're talking about one of the best teams in the world, where the competition is enormous. The work of the coaches makes that the demand of the first team is transferred to the youth system. We know that any player who is going to make the first team is ready to compete".

"I don't pay much attention to the DNI because that is demonstrated out on the court. I have seen great talent like Doncic, who we are seeing in the NBA. I'm proud of is giving them the opportunity. We think that the growth of the players goes through a demand to get to play with the best. We had this idea from the beginning and we're very happy that a lot of players make the step up. It is the best youth team in the world because everyone asks me why we do so well. That makes you proud".

The fans
"In the photo you showed me, the WiZink Center has fans and it makes me very sad because seeing it like this is what I like. Filling the arena is one of the objectives set and it will be an achievement when people can come back and watch Real Madrid. We want to bring basketball for madridismo and madridismo for basketball. When we play away and they tell you that there are no tickets it means that they want to see you. That makes us proud because the team is recognized. I don't understand sport without fans, but that's the situation we're in".

"I always say that there is a match that shows what madridism is. And we didn't win, we lost. After the season of the five titles we made it to the Euroleague playoff against Fenerbahçe dead and without energy. They were better and they beat us. In the first game in Istanbul we competed and in the second one we didn't. We played the third game in Madrid, they beat us and knocked us out. My boys gave everything and I was very proud of them. After that game the fans made us go out and they applauded us and that speaks volumes about how the Madridista feels about his team. The fans put the result in second place and valued the effort and work of the team. The fans transmitted that pride to the players. That is above any victory and without that, we couldn't have won the League that season".

20 titles and new objectives
"The assessment is done day to day. The sensation of feeling full every day you go to work, of having great professionals and players who are defining an era by your side. For me, this season's Super Cup is special because of the situations we have experienced since 12 March. In the bubble in Valencia we weren't able to be at our best level. Later, we went to the Super Cup with the mentality of showing what we are again. I'm proud that the team is competitive again. Every player must understand that they are at Real Madrid, that they understand it, and that makes me proud of the boys".

"I'm very happy to make 700 games, and 699 and 300. The number of matches means that people value your work and that you meet the objectives. I'm very proud to reach such a high number and the next challenge is to train again tomorrow. I'm focused on the next game and making the team better because that's what I'm obsessed with. I don't like to think about things in the long term".

Laso has another big milestone ahead of him: to pass Lolo Sainz as the Madrid coach with the most matches. There are 34 games between them, and he could do it this season. In addition, he could also break the record of the highest number of win held by Lolo Sainz with 593. With the victory over Estudiantes, Laso has 541. In terms of honours, Laso has won 20 titles, two behind Lolo Sainz (22) and 7 behind Pedro Ferrándiz (27). 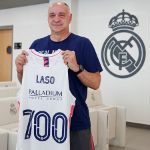