Reserves claim first three points in the league thanks to goals from Hugo Duro and Miguel Gutiérrez.
Navalcarbón

2
Real Madrid Castilla claimed all three points in their first league encounter of the season against Las Rozas (1-2) in a match that was played at the Navalcarbón stadium. The reserves' fine display in the first-half set the Whites on course for victory after goals from Hugo Duro, who made his official debut for Real Madrid, and Miguel Gutiérrez. The hosts pulled a goal back in injury time through Barca, but the Whites, who had to play with ten men from the 77th minute after Pablo Ramón was shown a second yellow card, saw the game out to claim their first three points of the season.

Castilla took the lead from one of their first attacks. Marvin's burst down the right and crossed for Hugo Duro to head home the opener (0-1, 12'). Las Rozas almost drew level immediately after a free-kick from Expósito sailed wide. The visitors began to dominate the game and in the 18th minute Chust almost doubled their lead, but his goal was ruled out for a foul. Six minutes later, Raúl's side got their reward. Hugo Duro shot from the edge of the area, Yelco saved and the ball fell to Miguel Gutiérrez to make it 0-2 (24'). Before the break, Arribas had the chance to put the visitors three up, but he was denied by the keeper when one-on-one.

Final minutes
The game continued in very much the same fashion in the second-half, as Castilla created a good chance early on. A low pass from Marvin into the box was helped on by Dotor but the hosts' keeper saved. The Whites continued to create opportunities with ease and just short of the hour mark Hugo Duro wanted a penalty after a foul by Yelco.  Las Rozas hit back nine minutes later when they fired a free-kick over the crossbar. Hugo Duro had another two chances in the 73rd minute to claim a brace. Four minutes later Pablo Ramón was sent off after picking up two yellow cards. Las Rozas pulled a goal back in injury time with a header from Barca. But Raúl's side held on to claim their first three points of the league campaign. 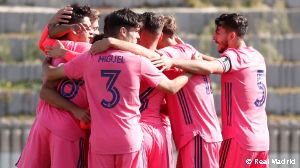 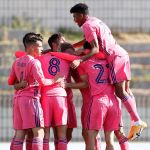