1
Real Madrid continue to adapt to the pace of the Primera Iberdrola. In their first game on the road on match day 2, David Aznar's team picked up their first point, earning a draw with Valencia. Following an evenly-matched opening 15 minutes with possession split between the two sides at the Antonio Puchades, the goals began to arrive. Asllani put Madrid ahead with a fine header after K. Robles' lovely cross from the right flank.

Valencia reacted swiftly to bring themselves back level, C. Cubedo turning in from a corner. In the second half, a lively Jakobsson had a goal ruled out as Real Madrid continued to push on in search of the winner, going on to hit the woodwork on 58 minutes. The team was pouring forward now and enjoyed several good chances in the box, before Misa was forced to stop a Valencia counter-attack with five minutes left. A point was the very least the team deserved from a fully committed display. 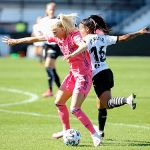