The 2020-2021 Action Plan and the accounts of last season were approved.
The president of Real Madrid C. F. and the Real Madrid Foundation, Florentino Pérez, chaired the Board of Trustees meeting that took place this afternoon via video conference. During the meeting, the Board approved the activity carried out throughout the 2019-2020 season in more than 90 countries, serving more than 85,000 beneficiaries in social sports projects. It also approved the accounts for the year.

Last season, the Foundation served more than 57,000 girls, boys and young people who received sports education in values, nutrition, healthcare and their regular schooling in 74 countries.

In Spain, more than 11,000 minors benefited from its different lines of activity in social sports schools for the integration of football and basketball, inclusive sport and adapted sport for people with different abilities, as well as in projects in centres for minors and particularly vulnerable groups such as those who have been victims of domestic violence, migrants or convalescent girls and boys in hospitals.

At the level of care for adults in Spain, work continued in prisons with more than 1,500 inmates, as well as programmes for the unemployed, the elderly and the homeless.

Likewise, 135 sports clinics were held to serve more than 24,600 minors in 34 countries and 20 weeks of summer camps in four countries.

The Foundation's Board of Trustees has also approved its Action Plan for the 2020-2021 season to guarantee the continuity of all the projects of the previous season, to serve more than 85,000 beneficiaries, taking into account the limitations that may arise due to health reasons and that could affect in-person activities. The Action Plan includes a notable effort in digital conversion and the use of telematic tools, as well as an increase in initiatives that guarantee the sustainability of all lines of attention to vulnerable groups, inside and outside of Spain, collaborating with the main NGO and multiplying the initiatives that promote the solidarity of Real Madrid supporters to contribute to the improvement of the lives of almost 100,000 people through education, development cooperation and integration. 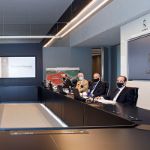