The best training facility in the world opened its doors on 30 September 2005.
Today marks the 15th anniversary of the opening of Real Madrid City, which since its inauguration on 30 September 2005, has undergone continual improvements and is currently the best training facility on the planet. The facilities are a source of pride for madridismo as a whole and they provided the setting as Real Madrid lifted the club's 34th LaLiga title last July. That triumph was secured at the Alfredo Di Stéfano, a tribute to the greatest player of all time, which hosted the first team's games following the break in action due to COVID-19.

Zinedine Zidane's squad train on a daily basis at Real Madrid City and the players come together at the residence ahead of games. The training ground is also home to the madridista academy, with the 13 academy football teams training and playing their games here. Castilla and the Juvenil A side's UEFA Youth League home fixtures are staged at the Alfredo Di Stéfano. Meanwhile, the stadium also hosted the meeting between Spain and Ukraine on 6 September.

Development
Other significant facilities are the academy residence and the corporate office building. In the former, the youth players have all of the necessary facilities at their disposal to foster their development, whilst the latter serves as the base for the club's staff and the Real Madrid Foundation. 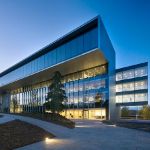