Real Madrid went in search of the win until the end in a match with chances for both sides.
Reale Arena

0
The champions kicked off the defence of their league title with a draw in San Sebastián. Real Madrid got off to a flying start, moving the ball around at pace and effective on the counter press, winning back possession high in the opposition's half as Zinedine Zidane's men put the Real Sociedad defence under real pressure.

They were knocking on the door from the off and the first chance fell to Ramos. A Toni Kroos corner in the 36th minute was met by the captain, who smashed his shot on the turn in to two home defenders. Four minutes later, Benzema tried his luck from inside the area after a nice team move. Just before the break, La Real had their best chance but the excellent Courtois kept Isak out in a one-on-one in the 43rd minute.

Chances and debuts
The second period got underway with a goalscoring opportunity for Real Sociedad. Oyarzabal spotted the run of Barrenetxea, whose volleyed effort flew narrowly wide of the madridista goal. Madrid's riposte came in the 55th minute in the form of a long-range effort from Carvajal that drew the best out of Remiro.

An even more clear-cut opening went the way of Benzema, whose 62nd-minute strike from the edge of the area forced the hosts' goalkeeper into a fine save. The game had become an open affair and Zinedine Zidane turned to his bench and introduced Casemiro, Valverde and debutant Marvin in place of Odegaard, Rodrygo and Modric. From here on in, Real Madrid totally bossed proceedings and poured forward in search of a winner, which ultimately failed to materialise. In injury time, Arribas, another Youth League winner, was handed his debut as he entered the fray in place of Vinicius Jr. 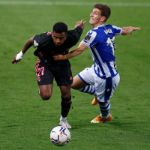