Florentino Pérez took part in the institutional event ahead of the match.
The Alfredo Di Stéfano stadium played host to a Spanish national team match for the first time. Shortly before the start of the match against Ukraine in the second round of the Nations League, an official ceremony took place in the presidential box. The Real Madrid President, Florentino Pérez, attended the match and received a commemorative plaque. Also present at the event were Miquel Bestard, Chairman of the RFEF Management Committee, and Andriy Pavelko, President of the Ukrainian Football Federation. 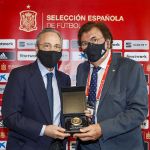