2
Real Madrid this evening booked their place in the UEFA Youth League final, where they will do battle with Benfica to secure this continental crown for the first time in the club's history. The showpiece will also take place at Nyon's Colovray Stadium, where the Whites prevailed over Salzburg in the semi-finals. The Austrians, a strong side who tasted glory in 2017, simply couldn't handle a Madrid team who were in front with barely four minutes on the clock.

Marvin outpaced a rival defender after Salzburg lost possession and he tricked his way past the goalkeeper before laying the ball back from by by-line to Latasa, who swiveled in the area before firing the ball home. In the very next move, a Real Madrid player again found themselves in the box and past the Salzburg goalkeeper, but, on this occasion, Arribas's effort from a tight angle hit the woodwork. After the half-hour mark, and following a short-corner routine, Miguel  doubled Madrid's lead after his toe-poked effort found the net.

Digging deep to reach the final
Salzburg sought to reduce the arrears, but it wasn't until the second half, and from the penalty spot, that they managed to haul themselves back into the match through Sučić's spot-kick (50’). The goal brought the Austrians to life and Raúl's
charges had to try and take the sting out of the game. The madridista coach turned to his bench and Pablo, Álvaro Carrillo and Aranda, who had a chance to put the result beyond doubt with an 83rd-minute volley that flew over the bar.  Fuidias then saved to prevent an equaliser as the Whites stood firm against the Salzburg pressure to advance to Tuesday's UEFA Youth League final, where Benfica await. 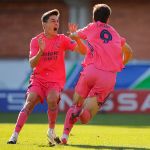