In the post-lockdown period, the team strung together 10 wins and a draw, a run of form that was crucial in securing the club's 34th league crown.
Real Madrid brought the curtain down on the 2019/20 campaign in Manchester as they closed out a season in which the team added a further two pieces of silverware to the club's honours: the 34th LaLiga title and an 11th Spanish Super Cup. The Whites mathematically clinched league glory on 16 July after recording a 10th straight win in the post-confinement period, against Villarreal at the Alfredo Di Stéfano. This stunning run of form, along with the point picked up on the final matchday, saw the side collect 31 of an available 33 points.

Zinedine Zidane's charges ended the season as the division's meanest defence after conceding 25 goals, the club's lowest-ever tally in a 38-matchday league campaign, whilst Thibaut Courtois landed the Zamora Trophy. In addition, the side kept clean sheets in half of their league outings (19), which matched the club's record in this department, set in the 1986/87 and 1987/88 seasons. Madrid also amassed the most wins (26), were the league's best travellers and the only team to remain unbeaten on home soil (13 matches at the Santiago Bernabéu and six at the Alfredo Di Stéfano).

Spanish Super Cup
The Spanish Super Cup took place in January in Jeddah (Saudi Arabia) with a new format in which Real Madrid lined up alongside Atlético de Madrid, Barcelona and Valencia. The Valencians were the madridistas' opponents in the semi-finals in a contest in which the Whites ran out 3-1 winners thanks to Toni Kroos's goal straight from a corner and strikes from Isco and Luka Modric. The final served up a pulsating derby bout against Atlético Madrid. The match ended 0-0 and was decided by a penalty shootout, in which Madrid prevailed in a 4-1 win. Fede Valverde claimed the Man of the Match award.

Zidane
The coach continues to etch his name into the history books in the Real Madrid hotseat, having guided the team to 11 pieces of silverware: three Champions Leagues, two Club World Cups and UEFA Super Cups apiece, a pair of LaLiga titles and two Spanish Super Cups. Zidane is the club's second-most decorated coach, with Miguel Muñoz the only managed to have delivered more trophies (14), and he remains unbeaten in finals. 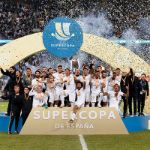