The team take on City in the sides' Champions League round-of-16 return-leg clash (Friday, 9pm CET).
The Real Madrid squad has now arrived in Manchester ahead of Friday's Champions League round-of-16 second-leg tie. The Whites' travelling party, led by president Florentino Pérez and featuring a 24-man squad, set out from the Adolfo Suárez Madrid-Baraja airport for the English city, where they touched down following a flight of just over two hours.

The team then transferred to The Lowry hotel, where they will be based. At 8pm tonight (7pm local time), the Real Madrid squad will complete their final training session, at the Etihad Stadium, before the meeting with Manchester City, in which the madridistas will be looking to secure a spot in the quarter-finals of Europe's elite club competition. 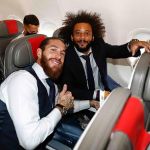