A metal structure consisting of two fastened beams running from the Castellana to Padre Damián has been erected.
The renovation work on the Santiago Bernabéu of the 20th century continues, with one of the most important processes in the construction of the new roof being carried out over the course of recent days: the start of the raising of the keystones.

The new fixed and retractable roof is central to the cutting-edge nature of the future Santiago Bernabéu, and it will protect all seating areas thanks to its fixed structure, whilst the retractable section will protect the pitch.

As a part of the roof construction, a metal structure consisting of two trusses or fastened beams that run from east to west i.e. from the Paseo de la Castellana to Padre Damián has been erected. Each of the trusses or beams measures 176 metres in length and they will rest on the two new towers on the Castellana and the two supports located where the turrets on Padre Damián previously stood. Ten keystones will be raised from each of these four points and they will meet in the centre to form a central keystone.

Construction
The keystones are constructed on the ground, in areas adjacent to the cranes that will hoist them up from each of the four supports. The square section on each keystone measures 6 m x 6 m and their lengths vary between 6 m and 18 m. Meanwhile, the weight of the keystones ranges from 33 tonnes (the smallest), whilst the first keystone raised in each support weighs in at 213 tonnes. 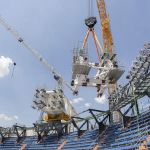