Raúl will lead the team as they finish this year's competition.
Real Madrid returned to training in preparation for the Youth League last-sixteen clash with Juventus. Raúl led a session which combined fitness and ball work on pitch 4 at Real Madrid City. Prior to the session, director of football Manuel Fernández greeted the coaching staff and players.

The Whites will take on Juventus in the last-sixteen on 16 August (6:00pm CEST). The clash takes place in the Swiss city of Nyon, which will host the rest of the tournament. The madridistas will take on the winner of the meeting between Inter Milan and Rennes if they make it to the quarter-finals (19 August). A hypothetical semi-final would see Real Madrid play against the winner of the Salzburg vs. Lyon game on 22 August. The final will take place on 25 August. 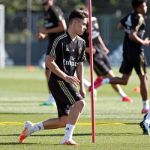