During the course of the renovation work, six tower and four mobile cranes will be used.
During the renovation work being carried out on the Santiago Bernabéu of the 20th century, as many as 10 cranes will be used to work on the roof and assist in the installation of the metal structure and other activities. Six of the cranes are tower cranes, which will remain in a standing position until the work is completed. Amongst this group of cranes, the tallest measures in at 82 metres, whilst the crane able to support the most weight has a maximum lifting capacity of 40,000 kg. To guarantee safety, these six cranes feature an anti-collision system to avoid any collisions between them and that extends to the load sweep areas.

There are also four lattice cranes, situated at each of the stadium's towers. Their task involves the elevation of the roof's main trusses and its other elements. Amongst these mobile cranes, the one situated at the corner where the Paseo de la Castellana meets Rafael Salgado is of particular note, with its lifting capacity of 800 tonnes and a boom length of over 200 metres (102 metres of main boom and a further 102 metres of luffing fly-jib). 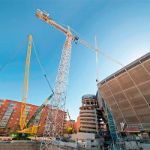