88
Real Madrid downed Casademont Zaragoza in the final match-up of the Final Phase, but end up without a spot in the Endesa League semis following Valencia Basket's win over Herbalife Gran Canaria. The Whites finished in second spot in Group B and level with San Pablo Burgos on three wins apiece, but the match-up between the two teams determined the final standings and saw the Burgos-based team come out on top. Tavares was unstoppable in his best performance in a madridista jersey (20 points, 14 rebounds, four blocks and a PIR of 43). Pablo Laso's charges end this unusual season with the Super Cup and Copa del Rey crowns to show for their efforts.

The Whites came out looking to compete and soon got on the front foot with some aggressive defending and fluent play in offense, where they were paced by Causeur and Tavares. The Frenchman, who posted seven points, opened up a +9 gap for his team in the fifth minute, and the center countered Casademont Zaragoza's improvement, triggered by the introduction of youngsters,
Alocén, Pradilla and Urdiain (22-17, min. 10).

Madrid take off
With their quick and high-energy play, Fisac's men gave Real Madrid as good as they got. A Urdiain trey made it 29-29 in the 14th minute, when the Whites reactivated the defense and began to clearly dominate in the paint and on rebounds, with Tavares on the verge of a double-double (nine points and rebounds apiece). Meanwhile, the Whites improved their scoring rate on triples, netting five in the second stanza. Llull and Thompkins (eight and seven points) paced an important 18-2 run to put Madrid in the driving seat at 47-31 with three minutes to go until the break.

Laso's men continued their success on the outside at the start of the third quarter and controlled proceedings by sinking treys and held a comfortable advantage that rose to 18 points at 59-41 (min. 23). Casademont Zaragoza didn't give in and a purple patch from Krejci brought them to within seven points. That is the closest they got to Real Madrid, who halted their surge with some solid play in which everyone contributed. Deck, Randolph and two straight treys from Taylor restored some calm ahead of the final stanza (77-61).

Tavares extinguishes opposition's hopes
The Whites couldn't let their guard down because the opposition made the most of any mistakes to run up court and score, on this occasion with Ennis and the excellent  Alocén, whose PIR score now exceeded 20, calling the shots. Casademont Zaragoza made it 89-84 with two minutes to go, but that's when Tavares stepped up to the plate. The Cape Verde-born center capped off his best performance for Real Madrid by posting eight of the Whites' final 10 points to quash the opposition's riposte and secure his team's third win of the Final Phase. Campazzo conjured up the play of the round with a triple on the buzzer from inside his own half (97-88, min. 40). It's now time for Madrid to turn attentions to next season. 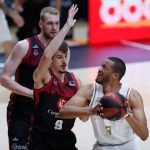