Anil Murthy presented Florentino Pérez with a photo of the madridista legend, who also triumphed as a coach at Valencia.
During the half-time break a small tribute was held in honour of to Alfredo Di Stéfano. To mark Valencia’s first visit to the stadium which bears the name of the greatest player of all time, their president Anil Murthy presented Florentino Pérez with a framed photo of Di Stéfano from his spell as a coach at the Mestalla, during which he won a LaLiga title and a Cup Winners' Cup. The president repaid the gesture by presenting his counterpart with a Real Madrid shirt. 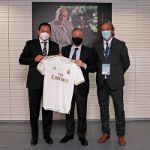