Real Madrid C. F., its president and board of directors express their deep regret at the passing of Goyo Benito, one of the great legends of our club's history.

Real Madrid C. F. wishes to share its condolences and sends its affection to his wife, Paula, and children, Patricia and Rubén, all of his family and loved ones. These condolences are also offered on behalf of madridistas from all over the world.

Goyo Benito was always a fine representative of our club's values. He played for Real Madrid for 13 seasons. During this period and including his spell as a part of the Real Madrid academy, he lifted six league titles and five Spanish Cups. He belonged to the generation of players that succeeded the Real Madrid yeyé team. He made 420 appearances for Real Madrid and was capped 22 times by Spain.

Real Madrid supported Benito right throughout his battle against the illness that he suffered from for over more than a decade.

The Real Madrid family is today in mourning as we remember one of the great defenders in our club's history. 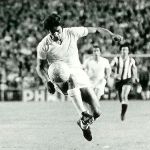