The roster, the technical team and the Board of Directors visited the headquarters of the City Council and the Community of Madrid.
Real Madrid presented the 28th Basketball Copa del Rey to Madrid's institutions the day after lifting the trophy at the Martin Carpena. The team and the coaching staff, together with the president Florentino Pérez and the Board of Directors, left from Real Madrid City with the first destination being the Palacio de Cibeles, the headquarters of the City Council. There, the Mayor José Luis Martínez-Almeida was waiting for them, and he received the champions and congratulated them. Florentino Pérez and Felipe Reyes presented him with a replica of the trophy and a personalised jersey. Martinez-Almeida returned the gesture with a commemorative plaque.

Florentino Pérez took the floor: "It's an honour to be here because it allows us to share this title with all the people of Madrid and all our fans. Real Madrid is a universal feeling, but it doesn't forget its origin and its starting point. We don't forget that Madrid is our city and to carry its name all over the world gives us great satisfaction, but it's also a great responsibility".

"I want to emphasize what this team, this coach and coaching staff have been and are capable of doing year after year. Triumphs, titles, dedication, tireless fighting and, of course, respect and passion for the club they represent. They all demonstrate with their immense work what some of the fundamental values of Real Madrid are. Companionship, spirit of sacrifice, solidarity, respect for the opponents, effort and infinite improvement. This is a team that makes basketball great and makes our institution and our crest great".

Martinez-Almeida: "You have statistics from another dimension"
"Thank you for bringing this joy back to the home of the people of Madrid. You have statistics from another dimension and on another level. You continue on the path of success and we hope that you can finish it with the League and the Euroleague. You carry the name of Madrid and Spain all over the world, you represent the best values of the sport, you represent the desire to continue winning and not to give up any in match".

Reyes: "We are very happy to be here again"
"Thanks to the Mayor for the welcome. We are very happy to be here again. We've been here a lot of times in the last few years and it’s been two years without winning the Copa del Rey and it seem like a long time without winning it. We have to thank the support of our president and our fans in good and bad times. We also have to thank our coaching staff, because without their help and their ability to create a good atmosphere in the dressing room nothing would have been possible". The visit ended with a family photo.

After the event at the Town Hall, the Whites went to the Real Casa de Correos, the headquarters of the Community of Madrid, where they were received by President Isabel Díaz Ayuso. After the broadcast of a video with some highlights of the Real Madrid’s 28th Copa del Rey, there was another exchange of gifts. Florentino Pérez and Felipe Reyes presented a replica of the trophy and a jersey dedicated to the President of the Community of Madrid, who in return gave a commemorative plaque.

"You know that this Copa del Rey, number 28 in our history, moves all madridistas. This is the sixth Copa del Rey in 9 seasons, won by a team that has played 7 finals in this competition consecutively. We are watching a legendary team, which is marking an era. A team that knows how to overcome all the adversities, that believes in the strength of this crest, that doesn't get tired of winning and that does it with humility, with talent and with the undeniable values that identify us as a club".

Díaz Ayuso: "You are synonymous with excellence and values"
"We open the doors again to receive again Real Madrid basketball with a title won in style and that we Madrilenians make our own. You are synonymous with excellence and values. I want to thank Laso for coaching a team that is a winning machine and all the players in an extraordinary team, captained by Felipe Reyes, that is breaking records in basketball. The Community of Madrid will always be indebted to you because you are Real Madrid and Madrid is a welcoming and dynamic society that is devoted to you".

The champions then visited the Only You Hotel Atocha, owned by the Palladium Hotel Group, sponsor of the basketball section. There they were welcomed by Abel Matutes, President of the Palladium Group, and Carmen Matutes, Deputy General Manager, who congratulated the team: "Thank you for allowing us to enjoy this Cup. You have shown that you are a united team with great players. We are proud to accompany you on this journey".

Reyes presented Carmen Matutes with a ball signed by the whole team and in his speech he said: "With your support, you make it possible for us to be here with the Cup and we hope to come back many more times". Laso said: "We are proud to have your name on the Real Madrid jersey. Winning a title is a prize for the great work that is behind it and for sure you know from your group that success comes from hard work". The event concluded with a group photo. 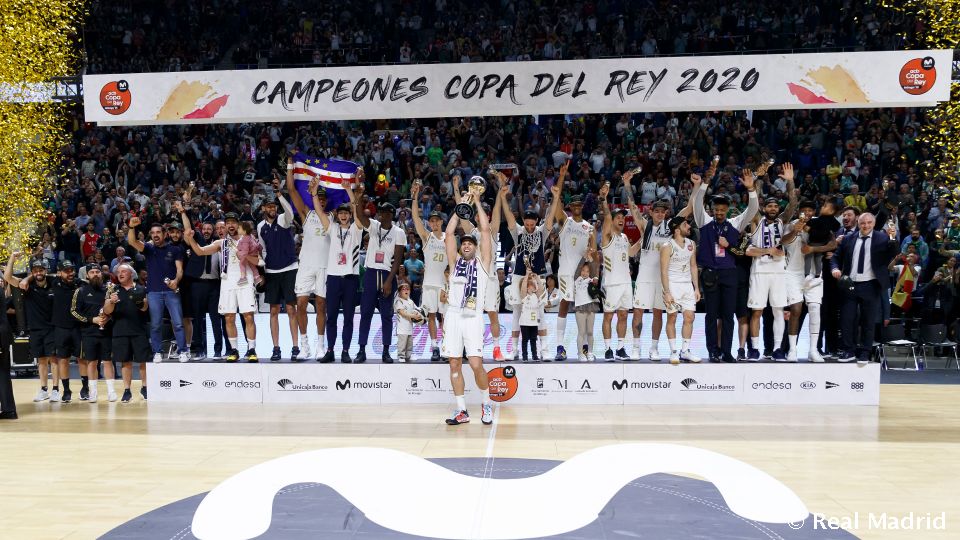 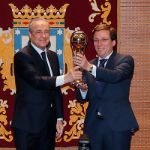