The youth team were unable to take all three points on their visit to Rayo Majadahonda, who levelled the game with just five minutes to go.
Estadio Cerro del Espino

2
Real Madrid Castilla shared the points with Rayo Majadahonda on their visit to Cerro del Espino. The Whites went 0-2 up thanks to a first-half Baeza brace, but the hosts came back to level proceedings in the closing stages. The result does mean Castilla extend their unbeaten run to four games, and take a point on the road at a side in the upper echelons of the table.

The academy team dominated the early moments of the clash and had the first chance, which fell to Fran García on 13’, when he unleashed a fierce drive that was palmed away by the hosts' goalkeeper. The madridista dominance didn't take long to yield results, and it was 0-1 when Baeza converted a Fran García cross, powering home a left-footed strike from inside the box. The game's second goal came after 29 minutes, from the very same boots. This time Fidalgo was the creator, feeding Baeza to beat Jagoba with a sweet first-time finish.

Hosts' reaction
After the restart, Rayo Majadahonda came out strong and starting to pose more of a threat. Altube was in fine fettle, standing strong as the last line of defence, making a superb save from a potent Moyita header on 53'. The hosts did find their reward with 73 minutes gone, when another vicious Moyita effort from the penalty spot found the back of the net. Castilla did all they could to keep their noses in front, but with five minutes left on the clock, Charlie Dean's header made it 2-2. 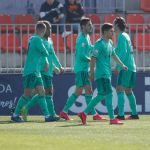