He scored in the win over Osasuna at El Sadar in the 1993/94 campaign.
The star of this week's instalment of Historic Goals, is Emilio Butragueño. The forward came into the Real Madrid first team back in 1984 after standing out at Castilla. A player with tremendous natural ability, he boasted quick feet and a change of pace which made him a nightmare for defenders.

In the 1993/94 season, Real Madrid made the trip to El Sadar to take on Osasuna on LaLiga match day 1. Today's goal was Real Madrid's third in the game. Alfonso laid the ball to Butragueño with a fine back-heel pass, and the forward beat the goalkeeper from the edge of the box.
Butragueño played at Real Madrid for 12 seasons, making 463 appearances and scoring 171 goals. He lifted 15 titles for the Whites: 2 UEFA Cups, 6 LaLigas, 2 Copa del Rey trophies, 1 Copa de la Liga and 4 Spanish Super Cups. 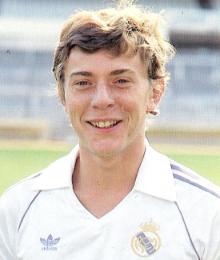