The Whites had two possessions in which to force over-time but were ultimately caught out by the Catalan side in the final period.
WiZink Center

86
Real Madrid have come unstuck in a game which saw them perform better than Joventut for the first three quarters. They were 14 points up at one stage, but couldn't kill the game off and were undone in the closing stages against opposition who refused to give in, despite the Whites having two possessions to send the game into over-time. Deck was key for Laso's men, with 14 points and 21 PIR. The schedule is relentless and next week another Euroleague double-header awaits.

The WiZink Center's 24 seconds of silence in tribute to Kobe Bryant, in homage to his jersey number ahead of retiring with the Los Angeles Lakers, lifted the curtain on a frantic opening period. The game started with short possessions, sloppiness on both sides and a constantly changing score-board inside the first 7 minutes. From then on, Real Madrid took the initiative, hitting two consecutive triples via Randolph and Carroll (7 points in 10 minutes) and an 8-0 run (19-10, min. 11).

Offesnses run the show
The rebound and turnovers proved central elements for the Whites in the first quarter. Their dominance on the former (22 of 11) and the efforts of Causeur (8 points), Llull and Reyes (7 each) up top, scoring 22 of their team's 25 points in the second spell, allowed the madridistas to maintain a ten-point lead (39-29, min. 18). It was an advantage which was stunted by too many turnovers
(9) and a rejuvenated rival, who began to find their range from 6.75 m. A Llull triple sent the game into half-time at 42-34 following a quarter which was a reflection of why they're the two best attacks in LaLiga (25-24).

Without Campazzo, who Laso had decided to rest today alongside Taylor, Thompkins and Mejri; his compatriot Laprovittola took up the mantle for the hosts. He upped the pace for his side, and his link-up with Deck (10 points and 4 rebounds) was slicing through the visiting defense to take the advantage to its peak at 60-46 on 26´. But the explosion of Joventut's new North American signing Wroten was key in Durán's men reacting to the madridista onslaught and believing in the victory themselves. Ten points from the new boy and a Morgan triple put them back in the game going into the final spell (70-64, min. 32).

Unexpected finish for the Whites
The visitors' run continued to panic the madridistas, who collapsed up top as Kanter, with 6 successive points, completed the comeback four minutes from the end (75-76). The Whites responded immediately: Laso's best player on the day, Deck, helped by a Randolph three-pointer, put Madrid back in front (80-76, min. 38). The Prepelic-Wroten duo then led a 3-9 run to 83-86 with 15 seconds to go. Real Madrid had two chances to level the tie but neither Randolph nor Laprovittola sunk their attempts from outside (83-86, min. 40). 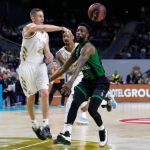