Emilio Butragueño received this recognition at an event held in Milan.
Real Madrid were recognised at the 19th edition of the Gianni Brera Awards, being, together with Athletic Club, FC Barcelona and Inter Milan, one of the four clubs from the five major European leagues that have always been in the First Division.

The Director of Institutional Relations of Real Madrid, Emilio Butragueño, collected this award at the Verme Theatre (Milan). The aim of the prize is to promote the memory of the famous Italian sports journalist and it is awarded by a jury made up of journalists, sportsmen and women and coaches. 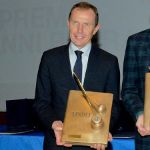