The captain became the madridista to have played the most games in the history of the Spanish Super Cup.
Sergio Ramos has now played more Spanish Super Cup matches than any other Real Madrid player. The captain showed his joy after winning the first title of the season: "Real Madrid is the biggest club in the world and the most successful, and that's why they have won throughout their history and why we continue to do it generation after generation, leaving everything on the field to try and win many more titles".

"And on a personal level it's a special day because it's always a challenge to know that you're two titles away from beating the player who has achieved the most at Real Madrid and hopefully I can pass him".

Valverde’s tackle on Morata
"Any player in our squad, if he gets in to that situation, puts the interest of the group before himself because it was a move that unfortunately had to end with such an tackle".

"I always take the fourth penalty because of superstition, not because I calculated that it could be the winning penalty if it ended up going in. My ankle is quite hurt and I was a bit scared because as time went by it got colder and more painful, but in the end when you know there's so much at stake you forget about the pain".

Numbers
After being decisive in the penalty shootout against Atletico, the captain made it 14 matches in this competition. This see him go past Casillas, who played 13. Behind these two are Raul (12) and Sanchis, Hierro and Guti, with 9. Ramos, who has won the trophy four times, made his debut in this competition in 2007 against Sevilla. His other Super Cup opponents have been Valencia, Atletico Madrid and Barcelona.

Ramos is the most experienced player in Zidane's team in this competition. He has not missed a single match in the seven editions the team has played since he arrived. The next in this list are Marcelo (9) and Benzema (8). 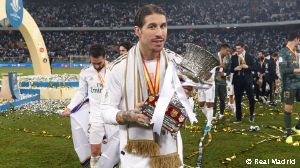