The Whites set up the victory before the break. Thompkins (29 PIR), Laprovittola (23) and Mickey (22) all showed real quality. Tisma made his debut.
WiZink Center

Real Madrid remain Endesa League leaders at the end of the first round of games folllowing a great derby win over Estudiantes and notching a fourteenth win in 17 games. The Whites, who were the away team today at the WiZink Center, once again showed their strength in depth and got the win in the second quarter with an 11-31 run. Thompkins was great yet again: 18 points, 7 assists (a record for him at Real Madrid) and 29 PIR. Laprovittola also did well, providing his best performance in white (11 points, 10 assists and 23 PIR), Mickey (20, 7 rebounds and 22 PIR) and Tavares (8 + 8). Tisma made his debute, becoming the thirteenth youth team graduate in the Laso era.

With 5 injuries, (Llull, Rudy, Causeur, Deck and Randolph) Real Madrid went into the derby as best they could. Thompkins was definitely at his best. He got the first six points for the team. Along with the presence of Tavares, who troubled Estudiantes, and a very active Mickey under the two hoops (7 points and 2 blocks), the Whites soon went ahead on the scoreboard with point differences of up to 8 (4-12, min. 5). Estudiantes reacted well and neutralized the Whites advantage, which at the end of the first half remained a three point lead after a three of Campazzo at the buzzer (19-22).

Madrid steps it up
The second Madrid three in the game opened things up from the free throw line too. The Whites changed things on the front court and improved in defense. They scored six threes in a second devastating quarter where they went 11-31 to break the game. Laprovittola did well as he netted 3 threes and gave 6 assists (17 PIR in 10 minutes), while Thompkins followed the Argentine and went to the break with 16 points and 25 PIR. Estudiantes could not match the league leaders despite Douglas and Avramovic trying their best (30-53, min. 20).

Real Madrid gave Estudiantes no chance to re-engage. The Whites tightened on defense and through Tavares, continued to intimidate Estudiantes, who hit 25 points (38-53, min. 25). The third quarter ended with the home side going 19-16, making it a 20 point difference (49-69, min. 30).

Tisma Debuts
Real Madrid went into the final quarter with the benefit of a heavy advantage. Laso gave Garuba some minutes and even more to Nakic, who had already appeared in the second quarter, while Mickey really went to town. The Whites had done the hard work and now they have to focus on the very demanding Euroleague ties next week in Russia (CSKA and Khimki). Estudiantes managed to cut down the runaway lead but the Whites had already wrapped it up, as six players got double PIR digits. Carroll came off with ankle pains before Boris Tisma came on for his first team debut at just 17 (72-87, min. 40). 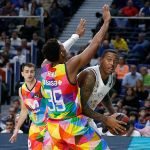