Real Madrid won the title in the final in Jeddah against Atletico after coming out on top in the penalty shootout (4-1).
Rey Abdullah de Yeda Stadium

0
Real Madrid won their first title of the season, the 11th Spanish Super Cup, against Atletico Madrid in Jeddah, Saudi Arabia. The match, this time goalless, was reminiscent of the final in Milan and had to be decided from the penalty spot. And just like that day from 11 metres, Real Madrid were better.

The two teams began the game very focused, knowing that behind this derby there was a title a stake, and in the early stages it was an even encounter. Casemiro got off the first shot and Modric tried again in the 8th minute after a well worked corner, but Oblak was equal to both chances. Five minutes later, Joao Felix shot wide from the edge of the box, but as the game wore on, Real Madrid took control of the ball with long spells of possession as Atletico sat in.

Real Madrid were the better side
The Whites used their best spell to force their opponents back and bombarded them with crosses from the right. Mendy tried to surprise the Slovenian goalkeeper after some great individual play on the left. In the last 15 minutes of the first half, Real Madrid had three corners that Isco and Casemiro got on the end of. Jović was involved in the first actions after the break, firstly he arrived in the area after a 50-metre run and in the 51st minute his left-footed strike came off the post and went to safety.

Zidane brought on Rodrygo for Isco (60’) and he was quickly involved in creating the clearest chance yet. The Brazlian combined with Jović, who whipped the ball across the box and Valverde was unfortunate not to see his shot hit the back of the net with Oblak beaten. Court oiswas then called into action, doing brilliantly to keep Morata out with just ten minutes to go. As the closing stages ticked around, the tension was palpable but Madrid refused to give up on their offensive. Mariano, who had only recently come on, headed just wide on 89 minutes, before Rodrygo shot straight at Oblak in time added-on.

Extra-time
Kroos tried his luck from distance (99’), while the rojiblancos looked to net the winner with two successive corners. The game had been blown wide open now, and Oblak did well once more to keep out both Modric and Mariano with 109 on the clock. Valverde was then sent off for bringing Morata down to ensure he couldn’t get one-on-one with Courtois, and the game went to the shootout. Just as it was in Milan, Madrid ran out winners from 12 yards in Jeddah. 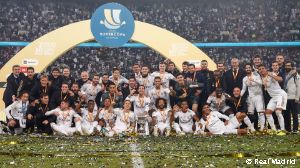 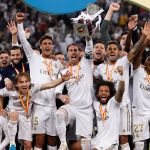