The Whites killed off MoraBanc Andorra in an impressive first half (50-14) and will go in to the Clasico as leaders.
WiZink Center

60
Real Madrid gave their fans a great game to end 2019 at the WiZink Center and record the 12th victory in the League, which will see them go in to the Clasico next Sunday as leaders. The Whites had a sublime first half (50-14), which had its highlight in the second quarter with a 24-2 run. Tavares, with a double-double (11 points, 12 rebounds and 25 PIR in 21:57 minutes) and Thompkins (14, 4 and 19) were the best for Laso's side, undefeated at home this season (this year they have won 37 of the 39 games played, their best record ever).

The leaders found themselves up against a well-established MoraBanc Andorra in defense, who knew how to stop and command during the first five minutes (8-9). By then, Tavares was already in the game (he finished with 8 points and 7 rebounds in the first quarter). It was Randolph, with five points in a row, who woke up the madridista attack. And there the opponent had no answer. A 16-3 run to end the quarter and raising the fans with three spectacular plays: Tavares' dunk, Randolph's block and a trey on the horn from Campazzo (24-12).

A perfect quarter
Real Madrid was unleashed in the second quarter. Laso's rotations raised the level and the leaders and el Palacio witnessed a great basketball match, possibly with the best minutes of the season, especially in defense, allowing only two points from the visitors (24-2) and capturing 32 rebounds. Led by an immaculate Thompkins (12 points without fail, 4 rebounds and 19 in efficiency in 10 minutes), Taylor in his 311th game (8 points and leaving the afternoon play with an impressive one-handed alley oop), and Rudy assisting (5), Laso's team recorded a massive run of 25-0 and later 37-2 in 13 minutes to reach the maximum at halftime with 50-14 on the scoreboard.

The storm relented for MoraBanc Andorra after the resumption. With the match very much in the balance, the Whites lifted their foot off the gas in defence and their opponents took advantage of it to record their best quarter with Musli leading the way (20-23). Laso brought in Nakic and Garuba in this period and the youth-team products showed their ability. Together with Tavares (double-double with 11 points and 12 rebounds), they kept the difference for their team always over thirty (70-37, min. 30).

Brilliant victory, the 37th this year at el Palacio
The rest of the game was a formality. Mejri finding form making his debut in League), Laprovittola and Nakic hitting baskets, Garuba once again made the most of his time on the court (8 points and 4 rebounds in 11 minutes)... In short, another team exhibition with everyone contributing. Andorra cut the deficit with three pointers, which was 31 points. Another defensive exhibition by Real Madrid this week (55 points against Baskonia in Euroleague). Laso's team will return to el Palacio on the 6th of January against Valencia Basket. 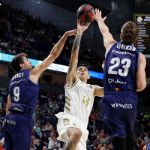