The team fought back from 13 points down against Olimpia Milan to record a ninth straight EuroLeague triumph.
WiZink Center

67
It takes a lot to get the better of Real Madrid. Olimpia Milan did just that in the first half as they made things uncomfortable for the Whites right from tip-off, thanks to the defensive wall set up by Messina. In a contest that was at a standstill and lacking in tempo, Pablo Laso's men found themsleves 30 points down at the interval. But the kings of Europe, summoned all of their pride to turn a match around in which they had been 13 points down. In what was a stunning team performance, special mention goes to Randolph (16 points and a PIR of 22), Mickey (15 points, 13 in the final stanza) and Campazzo (7 points, 12 assists and a PIR of 25). In under 48 hours' time, the team will be back out on court, this time on Baskonia's floor.

Olimpia Milan had the game exactly where they wanted it right from tip-off as Messina's troops had the wind in their sails. The exact opposite was true of Real Madrid, who was unable to assert any kind of tempo and failed to overcome the Italian defense in the majority of its attacks. The Whites didn't manage to settle in what was a very stop-start contest. What's more, they were failing to post points from the three-point line. Micov was pacing the guests and Randolph (7) was the only player who managed to cut the deficit (which was as much as seven) to just three points (18-21).

Uncomfortable night for hosts
The lack of success on rebounds in Laso's team was hurting the Whites' chances as the hosts continued to fail to find a way into the match. Meanwhile, the Italians pulled away on the scoreboard with each attack, racking up a +13 (24-37)  that set the alarm bells ringing in the Real Madrid camp. Mejri made his second debut for the madridistas and he breathed fresh life into the team, both in defense and offense. The Whites went in at the interval trailing by less than 10 points (30-39).

Real Madrid was in need of a boost and the home team found it after the break. It came in the form of a mix of defense, rebounds, shooting accuracy, and, needless to say, pride. Campazzo began to run around court and inject some speed into the game, whilst Deck started to punish the guests in the low post (seven), meanwhile, Randolph kept up his accuracy from the 6.75m line (3 treys) and Tavares's presence saw the Olimpia Milan players make mistakes on easy baskets, with Scola the only player to give the guests some hope. It took the Whites all of 27 minutes to get ahead for the first time and that's how the scores stayed at the 30-minute mark (54-52).

Mickey makes the difference
With the toughest part done, Laso's men came out looking to turn the match firmly in their favour after the restart. The stars of the show were
Laprovittola, who posted points and bossed proceedings in the opening stages, and Mickey. A +9 lead with seven minutes left (63-54) forced Messina to calla time-out. Micov best understood the message from his coach and showed the most determination in not giving in, but the madridistas' Dallas-born center was in fine form (13 points in the stanza), as was Campazzo who was revelling in dishing assists (12 in total). In less than two minutes, the margin was more than 10 and Olimpia Milan had thrown the towel in as Real Madrid went on to claim a ninth straight win (76-67). 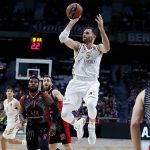