They picked up their eighth consecutive Euroleague win against Olympiacos with an exhibition led by Causeur (18 points in 17 minutes).

Real Madrid are just too hot to handle at the Wizink Center. Against Olympiacos, their most common Euroleague rivals (30 games), they picked up their eighth consecutive win, seventh on home turf, where they haven't been beaten in 8 months. And they did so with a dominant team display that left the opposition with no chance. The spectacular Causeur (18 points and PIR of 21 in 17 minutes) led a victory with five other madridistas in double PIR digits (Randolph, Campazzo, Thompkins, Tavares and Mickey). Rudy became the fifth-highest three-point scorer in the competition's history.

Real Madrid took the first five minutes to get warmed up. They started somewhat sluggishly up top and Olympiacos looked comfortable with the low scores (3-4 min. 4). It wasn't to last, though. The Whites' wrists began to loosen up and they maintained their defensive aggression. Three triples in a row helped them take the initiative with a 10-0 run. Tavares shackled Milutinov and Randolph (9 points) and Campazzo (7+4 assists) increased the advantage to +11 at the end of the first quarter (21-10).

Madrid set a high pace
Today's second string once again displayed the immense strength in depth Real Madrid possess. Five different players, and all doing their bit. Laprovittola enjoyed a good spell dictating the play; Carroll and Rudy were scoring freely and interior pair of Thompkins and Mickey were dominant in the paint. The first showed off his talent for point-scoring with 7, and the second owned the rebound to finish the first half as the highest-rated madridista on 10. A Carroll basket on 17´ saw the hosts' maximum lead at 39-20, and were it not for a 2-10 reaction from the Greeks, Laso's men could have put the game to bed in the first half (41-30).

Olympiacos brought the deficit back to below 10 points at the start of the third quarter (43-34, min.23). The Whites still seemed in control though, on a base of their defensive solidity. With Tavares back on, Milutinov's threat was negated once more, and with it, the visitors' ability to respond. In offense, there was more ammunition as a clinical Causeur sunk 10 points in 11 minutes. Alongside the Frenchman, Randolph was unstoppable from the perimeter and Campazzo dominated the play to record the best quarter (31-18) and head into the final period at +24 (72-48).

Managing the lead
Causeur picked up where he'd left off. The French forward was on fire, scoring a further 7 points in the first two minutes of the final spell. The gap remained greater than twenty. Olympiacos improved up top in the closing stretch. At 14 up and the Greeks growing in confidence, Rudy took it upon himself to stop the reaction of Pireo's men in its tracks. The Whites were ultimately far superior in a game which saw Rudy finish as the fifth-highest three-point scorer in Euroleague history (423). Including last season's play-off tie against Panathinaikos, it's now 10 wins in a row, more than eight months unbeaten. 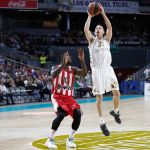