Jordi and Pablo were the scorers for the youths against Brugge who equalised in the last minute.
Schiervelde Stadium

2
The under-19s sealed a place in the Round of 16 of the Youth League after a 2-2 draw away to Brugge, thus avoiding a playoff against one of the winners of the route from the national champions. Jordi put the youths ahead, but the Belgians responded with a goal from De Wolf before the half-hour mark. Pablo, in the 77th minute, got the second for the Whites and in added time goalkeeper Lammens scored to make it 2-2.

The last match of the Group Stage began with both teams fighting for control of the game. The Real Madrid under-19s were the first to threaten on goal with a counterattack down the left wing but Baeza was unable to finish. The chance for the Whites was followed up by a shot from De Wolf, that went just wide. The first goal came in the 23rd minute after a move that culminated with Jordi turning home an Arribas pass. The advantage did not last long, as Baeza gave away a penalty on Aelterman that De Wolf converted. On the stroke of half-time, Pedro scored to make it 2-1 but the goal was disallowed due to an offside.

Goal for the keeper
After the break the dynamic was the same as in the first half. But as the minutes passed, the home side gained more control of the match. De Wolf could have scored his second, but his shot went wide (54'). De Cuyper and Aelterman had the best chances, although their shots were kept out by Luis. Poyatos brought on Álvaro (59') and Pablo (74'), who turned out to be the difference in the second goal for Real Madrid. A pass from Alvaro picked out Pablo to make it 2-1. The score line stayed the same until in to added time, when Lammens, the home goalkeeper, headed in from a corner to make it 2-2 at full time. 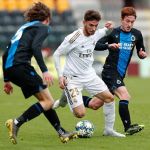