The Whites, who scored more than 100 points for the second game in a row, set their sights on victory over San Pablo Burgos in the first half. Thompkins recorded his best performance for the Whites (27 points and 30 PIR).
WiZink Center

93
Real Madrid brought to an end San Pablo Burgos' streak and extended theirs at the WiZink Center, where they have won six league and seven Euroleague games. The Whites maintain the lead with another offensive master class in less than 72 hours, after the 111 points scored against Valencia Basket. They went to 55 in the first half to kill them off. Another great team display, with Thompkins who, with 27 points, 7 rebounds, 5 three pointers and 30 PIR, had his best match for the Whites. Campazzo (22 PIR), Deck (25) and Tavares (26) were also fundamental in the tenth victory. Reyes, who was returning after his injury to his left shoulder, came off in the third quarter with discomfort.

An overwhelming success for the leaders, who showed the best defense in the league to leave their opponents without scoring any baskets in play until the 4th minute, putting together a 18-2, with Thompkins on form in his 100th game with the Whites in this competition (12 points in this quarter), Campazzo leading the way (4 assists) and Tavares dominating on the painting. A first quarter in which Madrid ended up with twice as many points as San Pablo Burgos (26-13).

55 points in the first half
Real Madrid continued their offensive masterclass in the second quarter and showed spectacular success on the trey. They scored 7, for 10 from 15 attempts in the first half. Laso's rotations worked perfectly. Reyes and Garuba, who also hit the mark from 6.75 meters, took over from Tavares in the area and between Laprovittola (3 three pointers) and Rudy, set a very high offensive rhythm that translated into 55 points in favor of the Whites at half-time. A great performance against Burgos who were improving in attack from the perimeter (Fitipaldo, 13 points, Benite, 8).

Another bombardment from the Whites at the start of the third quarter, led by Tavares, put the maximum of +26 with 65-39 in the 23rd minute. The visitors, without any pressure, picked up and turned the following minutes into a very successful exchange of baskets. Carroll and Thompkins on the Madrid side against an inspired Mcfadden for San Pablo Burgos, who ended up winning the third quarter by 27-28 (78-62, min. 30). Reyes had to come off due to discomfort in his leg.

Madrid, solid against the improvement from the visitors
Peñarroya's side, far from throwing the match, grew and again with Mcfadden as the star reduced the deficit to a disturbing 86-77 in the 34'. But Real Madrid reacted from the defense. The presence of Tavares, who already reached the double-double (10 points and 11 rebounds) and, above all, Deck who took the offensive weight of his team in this final stretch with 11 points, prevented greater evils and allowed the leaders to record the tenth victory in the League and second consecutive game in El Palacio scoring more than hundred points (104-93, min. 40). Thompkins got his highest points (27) and PIR (30) with Real Madrid. 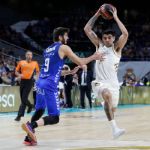