Pedro (2), Baeza, Pablo, Dotor and Arribas were on target for the madridista second string, who fought back after trailing 3-1 to PSG.
Alfredo Di Stéfano Stadium

3
The Real Madrid Under-19s turned on the style to book their place in the next stage of the UEFA Youth League after seeing off PSG at the Alfredo Di Stéfano in a 6-3 rout. The Whites, who got their noses in front courtesy of a Baeza strike, fought back after the break after finding themselves 3-1 down, thanks to goals from Pedro (two), Dotor, Pablo and Arribas. The madridista youth side are now the outright group leaders after Brugge were beaten.

It took all of five minutes for Dani Poyatos's charges to break the deadlock after Sissako was adjudged to have handled in the box and Baeza converted from the spot. Despite the madridistas' dominance in the opening 15 minutes, the Parisians grew stronger as the game wore on and levelled matters courtesy of Muinga's spot-kick. The U19s had a clear-cut opening to restore their lead on the stroke of half-time when Baeza headed onto the crossbar, whilst Pedro's effort on the rebound was gathered in by Franchi.

The second half got under way with two fine chances for Dotor and Pedro, but Muinga was once again in the thick of the action as he put the visitors ahead for the first time in the game with a three-minute brace (49' and 52'). The whole complexion of the game changed following Sissako's sending-off for a second yellow and the Whites reduced the deficit in the 62nd minute after Esteban found Dotor on the edge of the area and he made it 3-2.

Within the space of less than six minutes, the madridistas completed a stirring comeback. Baeza's corner picked out Pedro, who nodded home to restore partity in the 66th minute. The frontman again shone in the very next move after his superb run ended with him firing the ball home to make it 4-3. There were further goals to come from the hosts, with strikes from Arribas (73’) and Pablo, who rounded off the scoring in injury time as the game ended in a 6-3 win for the hosts. 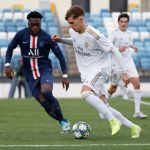