Florentino Pérez presided over the ceremony that recognises the members celebrating 25, 50 and 60 years of uninterrupted club membership.
Real Madrid this morning held a ceremony to present the 2019 pins to the club's longest-serving members. The club presented a total of 2,930 pins: 127 gold and diamond pins to mark 60-year membership, 337 gold pins for 50 years and 2466 silver pins for 25 years of membership. Club president Florentino Pérez presented the gold and diamond pins, whilst the gold and silver pins were handed out by madridista legends Amancio, Buyo, Butragueño, Sanchís, Hierro, Roberto Carlos, Solari and Arbeloa.

The club's director of institutional relations, Emilio Butragueño, hosted proceedings: "We've reached this stage by sharing some unforgettable memories and today we want to look back on a whole lifetime together. In 1959, 60 years ago, we beat Stade Reims 2-0 in what was our fourth straight European Cup success. We lifted that trophy with a unique team of legends, including Di Stéfano, Kopa and our dear honourary president, Francisco Gento. That year saw a man join the basketball team who would transform the team's history as Pedro Ferrándiz was appointed coach".

"Fifty years ago, in 1969, Real Madrid again secured the league title, with Amancio finishing the season as Pichichi. The basketball team also secured the league title and the Copa del Rey too. In 1994, 25 years ago, a new star was born, a 17-year-old youngster who was expected to become a legend made his debut in Zaragoza. This was the beginning of Raúl's great era. Meanwhile, Real Madrid's basketball team named a new coach in Obradovic, a man that led us to our eighth European Cup triumph. Today, dear club members, we pay tribute to you. Thank you all and congratulations".

Special mentions
During this special ceremony, Florentino Pérez presented gold pins to madridista legends Butragueño and Sanchís. The club's director of institutional relations was a member of the first-team squad for 12 years and scored 171 times, whilst the defender spent 18 seasons with the first team. Meanwhile, Agustín Herrerín received a gold pin in posthumous recognition, with the president presenting the distinction to the legendary Santiago Bernabéu stadium delegate's children. 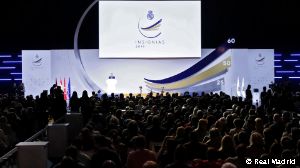 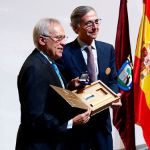