Eighth consecutive victory for the leaders, who remains undefeated in this competition with a great performance from Tavares and Deck.
WiZink Center

71
With today's victory over Unicaja, the eighth in a row, Real Madrid have recorded their best start to the league since the 2013/14 season, also under the guidance of Laso (28-0). With two big defensive quarters (first and third) and regular in attack, the leaders defeated the second best defense in the championship. Deck, in the first half (12 points, 7 rebounds and 16 PIR), Tavares, with a double (10 points, 10 rebounds and 24 valuation), and Llull (13 points), were decisive for the Whites who remain unbeaten in the league at the Palace so far this season: seven out of seven.

The leaders began by giving Unicaja a taste of their own medicine: defense and rebound. The first allowed them to only give 13 points to their opponents in the first quarter. And the absolute dominion of the second in the two baskets, with great work from Deck and Tavares (8 rebounds between both, 4 of them offensive), saw them launch rapid transitions that led to take an advantage of eight points in the start, led by the perfect 10 in field shots from the Argentine (21-13).

Madrid, very successful on the trey
The team from Malaga improved in the defence and offensive rebound, the same weapons that had been used by Real Madrid at the beginning. Adams, Suarez and Gerun gave their team more attacking fluidity to get closer on the scoreboard (29-26, min. 15). The Whites endured a big push from the visitors with three pointers. 6 in this quarter (two from Randolph, two from Carroll, who now has 770 in the league equalling Raúl Pérez as the seventh highest three-point player in the history of the ACB; another from Rudy before coming off due to a blow to the knee; and a last by Taylor) to give back some breathing space for Laso’s side before the break (46-37).

Real Madrid's had a brilliant start in the third quarter that, with a 7-0 run, saw them 16 up at 53-37 in the 22' (+18 was the maximum). They recovered good feelings form the beginning in defense, allowing them to maintain control of the match. In addition, Laso's rotations worked. Causeur, in his first minutes of the match, became the reference of an attack somewhat less productive than in previous periods, leaving Unicaja alive thanks to their success on the free throw (62-51, min. 30).

Llull and Tavares leading the way to victory
Real Madrid had to cope in the last quarter with some of the best of the Unicaja play. And did so with mastery. Again, emerged the figure of Tavares, intimidating and scoring. He was unplayable for the opposition pivots. He accompanied Llull in attack (8 points), and Laprovittola, who had come on in the second half, to deny any chance of a fightback for the opposition. The 15 points advantage with which they took in to the last three minutes allowed the Whites to take a comfortable victory against one of the big teams in the league. Eighth win on the bounce (82-71) and now switch attentions to the Euroleague Clasico next Thursday. 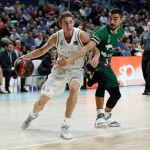