The Whites beat Galatasaray to hold on to top spot and make it a clean sweep of wins in the UEFA Youth League.
Ali Sami Yen

1
Real Madrid Under-19s claimed a 1-0 away win over Galatasaray at the Necmi Kadioglu Stadium in the sides' meeting in Matchday 3 of the UEFA Youth League group stage. Central defender Pablo Ramón struck in the closing stages of the game to hand the Whites' youth side, who lie top of the group, victory. Dani Poyatos's charges came out all guns blazing and created several clear-cut chances, making full use of the flanks and with Latasa keeping the hosts' centre-backs on their toes. Inside the opening 10 minutes, Marvin fired in the first warning shot with an effort from the right which flew over the top. Minutes later, the Turks' goalkeeper denied Latasa in a one-on-one after Luis López pulled off a good save in Galatasaray's first forward foray.

Both sides eased off after a frantic start, before the madristas again began to make inroads on the hosts' box. With Pablo Ramón halting the Turks' attempts to break on the counter, Latasa failed to hit the target with a dangerous effort from inside the box. Santos played in a fine cross that Dotor failed to connect with from point-blank range and Santos then had an effort saved by Balaban as Madrid came close to head in 1-0 up at the break.

After the restart, the U19s continued to press and remained camped in the home side's half, with Pablo Ramón joining the attack from the heart of the defence to pose a greater threat. A fine shot from the centre-back struck the woodwork and the rebound fell to Latasa but he ended up sending the most presentable chance of the game over the bar. Yunus Akgün, Galatasaray's standout man, then failed to get the better of Luis López, who was an assured presence between the sticks.

Deserved winner
With the introductions of Álvaro Martín, Esteban and Arribas, Poyatos sought to freshen things up in the middle third and the attack, in search of the goal the Whites deserved. Álvaro Martín and Baeza failed to score following a double chance. The Whites kept probing up the last and were rewarded in the 89th minute thanks to Pablo Ramón's towering header that secured the win and keeps Madrid top of the group. 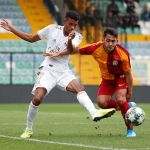