Real Madrid remain top of the League, picking up their eighth win of the season as every player got on the scoresheet.
WiZink Center

64
With San Pablo Burgos’ win earlier in the weekend, Real Madrid had to replicate the feat to maintain their spot at the top of the League. And they did just that, giving Montakit Fuenlabrada no chance as they stormed to their fourth win in a row in the competition and eight in total at the start of this new season. The WiZink Center proved a fortress as the Whites showed what a great team they are despite the absences of Campazzo, Taylor, Thompkins and Mejri. Deck (12 points and PIR of 23), Tavares (8 and 12 rebounds and 19) and Carroll (15 points and 4 triples), were the standout players among 12 scorers.

Laso made a lot of rotations after the victory against Maccabi on Thursday. Without Campazzo, Laprovittola led the team but it was the inner pair Tavares-Garuba who would mark the differences at the start with 12 points and 12 rebounds between them (8 and 7 for the man from Cape Verde, and 4 and 5 for the youth player). Eyenga kept things going for the team from Fuenlabrada until 7', when the Whites put an 8-0 run to end the first quarter 22 to 14.

Advantage
The Madrid bench disconnected Fuenlabrada. All doing their part perfectly and all coming on and making a difference. First it was Rudy and a spectacular Mickey, who left an alley oop and a colossal block on Mockevicius on the next play, to extend the Madrid run at the start of the second quarter to 17-2 (31-16, min. 13).

The opponents improved offensively with the passing of the clock, thanks to Eyenga again and Rowland, but without seeing results against a Real Madrid that worked perfectly. Carroll exhibited his scoring instinct with 9 points in 8 minutes (he would end up with 15 and 4 treys). Reyes joined with 5 others and the home side went to 48 points in a first half dominated by the Whites (48-31).

All 12 scored
Two Randolph trey in his first minutes put Real Madrid over twenty ahead. In defense they squeezed a little more, allowing Fuenlabrada only 12 points in this quarter, and they put the game beyond them for good. Laprovittola and Causeur joined in the scoring to reach +31 with 67-36 in the 27th minute. In the final leg and with the memory of +55 in the semifinals of the Super Cup, the visitors tried unsuccessfully to cut the difference, which was +25 at the end (89-64). Nakic made his debut at home. Victory number 16 followed against the Fuenlabrada before facing the next three games away from the WiZink Center (Zalgiris, Obradoiro and Anadolu Efes). In the build up to the match, Laso received the trophy for the best coach of the year, making that five. 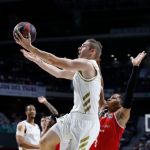