"We're embarking on this new journey together to continue to add to our iconic honours list and face up to the new challenges during a spell in which our basketball team has already made the history books", commented Florentino Pérez.
The presidential box at the Santiago Bernabéu played host to the unveiling of the sponsorship agreement between Real Madrid's basketball team and the Palladium Hotel Group. The event was attended by the Real Madrid president, Florentino Pérez; the CEO of the hotel chain, Abel Matutes Prats; several members of the club's board of directors; and the coach of the basketball team, Pablo Laso along with the roster, amongst others. The club's president spoke of the agreement in the following terms: "Today's a really important day for our basketball department. It sees the name of Real Madrid take its place alongside a prestigious company which will help us to become stronger and face up to new challenges during a spell for our basketball team which has already made the history books".

"I thank Abel Matutes and all of your team for your commitment and for aligning your values with ours. These values match our constant pursuit of excellence, of being innovators and being faithful to our beliefs as we aim to always lead the way. We're embarking on this new journey together to continue to add to our iconic honours list and to continue to prove that with daily work, effort and sacrifice the word impossible doesn't exist".

Legendary team
"Today's Real Madrid basketball team is achieving a feat that which will be remembered by all of us who love this sport. This team and these players are legends amongst madridismo, led by a winning coach in the shape of Pablo Laso. The statistics are undeniable and so impressive. The team has lifted 17 pieces of silverware in the past eight seasons: two European Cups, an Intercontinental Cup, five league titles and Copas del Rey apiece and four Spanish Super Cups. That's a winning cycle that'll be virtually impossible to repeat, but this group of players shows us every season that their hunger to continue winning things knows no limits".

"A team that transcends our borders and that has achieved something impressive: Real Madrid's basketball team is the team with the third most followers on Facebook in the world, including all of the NBA teams. The team boasts 15.9 million followers and comes in behind the Los Angeles Lakers with 21.6 million and the Chicago Bulls with 17.9 million. All of the other NBA teams have fewer Facebook followers than Real Madrid”.

Abel Matutes Prats: "El Real Madrid is a role model"
"This really is a landmark agreement for us because this is also the year of our 50th anniversary. For any successful brand, Real Madrid represents a role model and we have to learn from the club's values. Excellence is at the guiding light for both institutions. It's a source of pride and an honour to become Real Madrid basketball team's main sponsor and be a part of this club's history. This agreement sees us link up with the leading basketball club within FIBA. I hope that the journey that we're embarking on today proves to last for many years and that we share many successes together. We're keen to ensure that we're working with the very best. Thank you for placing your trust in Palladium Hotel Group, Hala Madrid!".

The event, which was also attended by the club's director of institutional relations, Emilio Butragueño; the director of the basketball department, Juan Carlos Sánchez Lázaro; the technical director, Alberto Herreros; and club ambassadors Roberto Carlos and Arbeloa, was rounded off with a customary group photo. 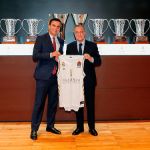