The Whites, with an offensive and defensive master class, are leaders after two games.
WiZink Center

69
Real Madrid returned to the WiZink Center in the League and did so with a tremendous display in all aspects of the game and that, in addition to recording the second consecutive victory, sees them go top of the ranking on basket average. The Whites overwhelmed a UCAM Murcia team that in the first game had scored 90 points, and did not give any concession from the off. A great match by the Real Madrid players with a colossal Garuba (13 points, 10 rebounds, 4 slam ducks and 3 blocks for a 24 PIR) and an always successful Campazzo (14, 7 rebounds, 6 assists and 23 PIR). Llull, with 17, was the top scorer.

There was no fatigue after having played the League opener less than 48 hours before, Real Madrid were out on the court and meaning business from the off. And from the first minutes of the match, they manage UCAM Murcia in defense (only 13 points in the first quarter) and showed power in attack. Campazzo stood out (9 points, 3 from 4 treys), Carroll and Taylor (5 each) and especially Garuba, magnificent in both areas, breaking the bottom line to get 8 points (3 dunks), 3 rebounds and a block, making it 30-13 at the end of the first ten minutes.

Llull on form
The Murcians now had to suffer Llull (8 points, 2 treys) bringing up the maximum at +26 and they did not recover. Booker totally missing in the scoring aspect, UCAM Murcia tried to reduce the attacking threat of the Whites. They succeeded, but only in part, limiting Laso’s to 19 points (5 from Laprovittola) and go to the locker room at 49-25, struggling to find anything positive from their trip to el Palacio.

The visitors came out looking to surprise the home side. They played from the 6.75m line and strung together a 0-6 run. But again, the figure of Garuba emerged, adding another dunk to his statistics and a three-pointer from Campazzo and another from Causeur to put things back in place. What was causing Laso’s side the most problems, and giving options to Murcia, was the offensive rebound of UCAM (68-43).

Share of minutes
The Whites’ coach continued to move the bench saving his players for what’s to come (next week Fenerbahçe and Tenerife). Now it was the turn of Reyes with five consecutive points (trey included) and a three-pointer from Laprovittola to stretch the difference over 25. The ex-academy player Cate was one of the key men for Murcia and Llull one of the stars in attack to finish as top scorer of the game, for a Madrid that didn’t take their foot off the accelerator until the final buzzer sounded (97-69). 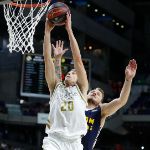