Real Madrid defended their title after defeating Barça in the final played at the WiZink Center. Campazzo was chosen as MVP.
WiZink Center
89

79
Real Madrid won their sixth Spanish Super Cup, the second in a row, after beating Barça in the final that took place at the WiZink Center, becoming the team to have won this title the most, alongside the Blaugrana. The Whites were superior throughout most of the match, especially in the second quarter (27-13), once again demonstrating their hunger for victory and their DNA. Campazzo (16 points and 22 PIR in the final) was awarded the MVP for the tournament in another classic performance by Laso’s side, with eight players on 8 points or more. Real Madrid’s eighteenth title under Laso at the start of the ninth season. The legend continues.

The start of the final was of more tension than good play. It was hard for Real Madrid to score, four minutes past before they found their way with their shooting. Barça, were sharper out of the blocks, going 6-0 in front. But the Whites were tuned in at the back and, after showing great intensity in defense and the introduction of Deck for Randolph, they began to spark in to action breaking the Barca defense and hitting back with an 8-0 streak. In the rest of the quarter, the Whites stayed ahead on the scoreboard, opening up a 7-point lead to 21-14, led by Campazzo (5 points, 4 rebounds and 3 assists) and Carroll (7 points). Two Delaney trey closed the first 10 minutes (21-20).

Real Madrid picked up the level
Barca cut the difference in the last minute of the first quarter but that did not change the way Real Madrid were playing, taking things to the next level in the second quarter in both defense and attack. The hunger was on display, embodied in the immense figure of Rudy (8 points in 9 minutes), dwarfing all the offensive power of the Catalans. Deck (7 points and 4 rebounds) and Mickey (8 and 5) formed a tandem that was impossible to stop for the opposition centers. The work of the Argentine was essential. Laprovittola, his teammate, showed his offensive arsenal as well and with a trey to open up the maximum in the game at 47-29 in the 18’. Laso’s side put together a run of 27-13 to Barça in this second quarter (48-33).

The group led by Pesic reacted in the third quarter. Davies assumed the responsibility in attack and little by little his team were eating away at the deficit, getting it down to 10 points. Real Madrid did not lose concentration under the Barça onslaught. Their good work on the offensive rebound and Rudy and Deck's return to the court allowed them to counter an opponent. Several baskets from Mirotic and a trey from Hanga on the buzzer left it at 69-63 going in to the last 10 minutes.

They are the current champions for a reason
Higgins had joined the Mirotic-Davies duo, seeing the lead cut to just four points (69-65, min. 31). But Real Madrid responded like champions. Everyone playing their role perfectly: Deck, Reyes, in his first appearance, Laprovittola on the tree-pointers, Rudy's intangibles; and the best of Llull. The team performed in style and hit back on the offensive, countering the push from Barça that saw the scoreboard hit 84-79 with just over a minute to play. But Real Madrid stepped up and did it once more. This was the final of the treys from MVP Facundo Campazzo (incredible year with the MVP in the final of the league), which finished off the Catalans. The last minute of the match saw the WiZink Center standing, shouting “Champions, champions!” (89-79). First title of the season. 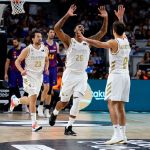