7
Real Madrid closed out their involvement in the International Champions Cup 2019 with a clash against Atlético de Madrid in the first ever derby on American soil, hosted at the MetLife Stadium in East Rutherford (New Jersey). The Whites were on the receiving end of a big defeat as their opposition killed the game early on. Inside the first minute, a Diego Costa put Atlético ahead, before Joao Félix made it two with 8 on the clock.

Correa, who replaced the injured Morata, made it  0-3 before the 20-minute mark. Madrid looked to reduce the deficit with a cross into the area for Jović, but the Serbian striker clashed with Oblak and had to leave the pitch. The game was not even half an hour old when Costa found the net once again. In the closing stages of the first half, Vinicius Jr. had the madridistas' clearest opportunity but his effort came back off the post. Costa made it 0-5 from the spot before half-time.

Zidane brought on Keylor Navas, Carvajal and Lucas Vázquez after the break but it just wasn't Madrid's day, and Costa picked up his fourth of the evening on 52’. A Hazard cross saw Nacho notch the Whites' first goal on 60 minutes. Shortly after, Costa and Carvajal were both sent off and there were a further three goals to come with both teams down to 10. Vitolo netted one, before a Benzema spot-kick and a Javi Hernández effort made it 3-7 at the final whistle. 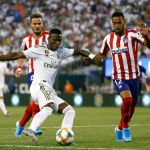